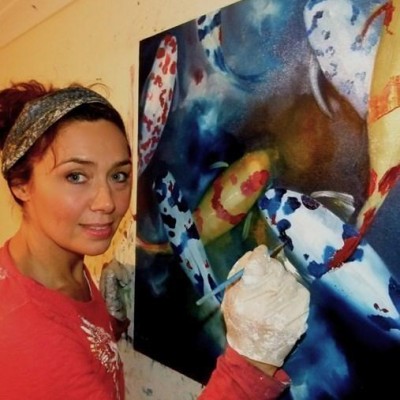 Julie Ann's remarkable oil paintings feature intensely coloured underwater scenes in which shoals of fish swirl in a vibrant vortex of light. This light is the unifying factor in all of Julie Ann's work, originating in the sight of the sun breaking through the misty darkness. This first blissful moment of light inspires the artist from both an aesthetic and a spiritual viewpoint.


Julie Ann grew up in the North of England. After completing her A Levels she set off to see the world and spent an eventful and adventurous few years abroad. After working as a catwalk model in Israel, touring as an actress in California, and travelling around much of Eastern Europe she returned to England and settled in the Lake District.


Living in one of the UK's most beautiful national parks proved a significant experience for Julie Ann. 2000 was a landmark year for her: having excelled in art at school, she began to paint once more, and set up her own studio in Kendal where she started to create her dazzling oils.


Since then she has not looked back and her work has been exhibited to great acclaim across the UK.