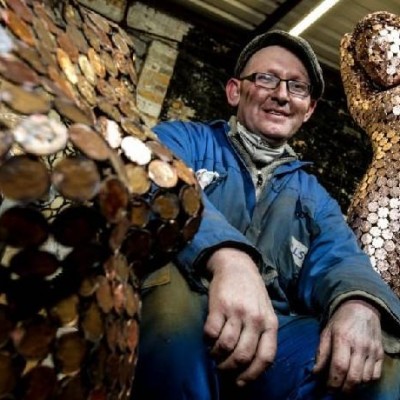 Shaun was born in 1969 and brought up in the mining village of Wombwell near Barnsley in Yorkshire. At school he always enjoyed art and was fascinated by Salvador Dalis work.

Shaun would spend much of his free time rock climbing and caving in the Peak District.

Shaun soon found himself replacing the odd roof tile which progressed to him becoming a full time roofer and also introduced him to a magical substance called slate. There were often skips full of quite large pieces at the slate companies who supplied him with roofing tiles, and the words take as much as tha wants, lad were music to his ears. Later, this would progress to weekly trips to Wales where there are slate tips the size of mountains. This was more or less how Shauns life was for the next 15 years or so with him creating just the odd sculpture now and again from either slate, or sometimes large lumps of sandstone. People who saw the sculptures would often comment theyre very Barbara Hepworth, arent they? At this point, however, Sean had never heard of her!
He eventually discovered that some of her work was displayed at Yorkshire Sculpture Park, less than ten miles from where he lived. These visits to Y.S.P. also introduced Shaun to the work of Henry Moore, and he found aspects of similarity to his own work.
However, the most influential sculptor he discovered there was Andy Goldsworthy. Andys balanced land art became an obsession and this led Shaun to the shallows of the nearby reservoirs of the Peak District where he would sit in the water balancing as many as 6 or 7 large rocks with just millimetres of contact points between each one.
12 years ago, Sean moved to the coast of Flamborough near Bridlington. Here he continued his land art where his playground was the cobbled beaches. He was often in the local paper, or at least his art was. For quite a while the newspapers were curious as to who was creating these sculptures. Mysterious Artist Strikes Again was a common caption above a photograph of one of his sculptures.
Shaun then found a small workshop and decided to have a go at sculpting full time  making large abstract slate pieces. These sold very well and provided him with an income for quite a few years.
Shaun jokes that if you were to ask his wife or any of his family to describe his work at this point, they would say he has to go over the top and make everything twice as big as it needs to be. This trait eventually became his downfall as his left leg eventually gave up due to the weight of the slate he had been carrying around. His leg already had pins and a metal plate in it from an old climbing accident and by the end of a long day working on the slate, he would be limping badly and in a lot of pain. He even constructed an external metal calliper which went from under the heel of his boot up to his knee and was strapped to his leg. This helped in two ways; it not only took the pressure off his ankle, it also made him dig out his welder to make it.
Shaun has never looked back and for the last five years, he has made nothing but welded sculptures and whereas before, the natural shape of the stone dictated the final form of the finished sculpture, with welding Shaun can let his imagination run wild and make practically anything.
Shaun still goes over the top and makes everything as big as possible, because after all, hes a Yorkshireman and so value for money is everything, even in art! 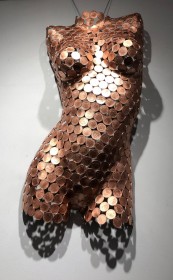 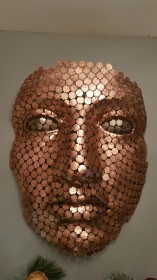 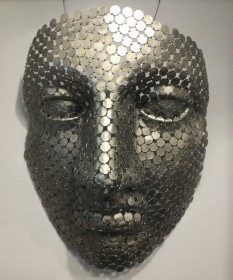 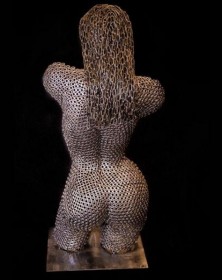 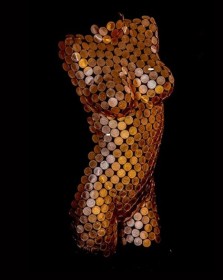