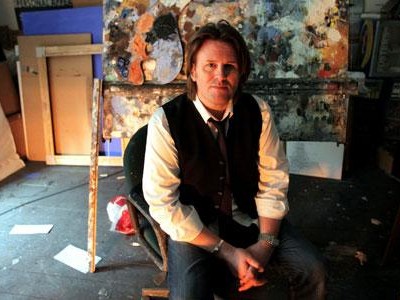 The characters that populate the paintings of Alexander Millar are drawn from his experiences of growing up in a small mining village near Kilmarnock, and later moving to industrial Newcastle-Upon-Tyne, where he had many jobs before becoming a professional artist in 1988. His scenes of working people in the 1950s: old men in flat caps, gossiping women in head-scarves and aprons, street drunks and gadgies. He sees them as different choreographed parts in a sort of street ballet.
His love of the steamy atmosphere of the train station in which his father worked can be seen in the smoky backgrounds of his paintings, which are also toned by the subtle, blue-ish light of the north of Britain. Until four years ago, Millar painted his often humorous, Chaplinesque characters in a landscape, but after the death of his father, and experimentation with layers of white paint, now his solid, iconic figures leap out of the ghostly background.

A self-taught painter, Millar describes himself as just a big old fashioned nostalgic romantic, and his paintings prompt emotional reactions from those recognising the vanishing society he depicts. His paintings are greatly in demand internationally, and he is collected by celebrities such as Sting and Robert Plant. 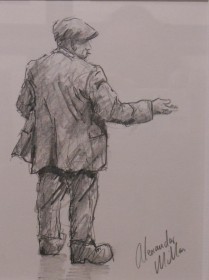 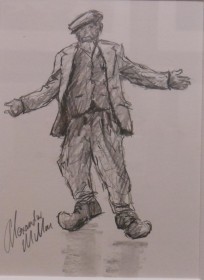